Here are some non-diet key actions to strengthen the immunity of children and the elderly:

Besides that, practicing these key actions and take BiO-LiFE ImunCol+ Probiotix Gold could further strengthen the immune system. 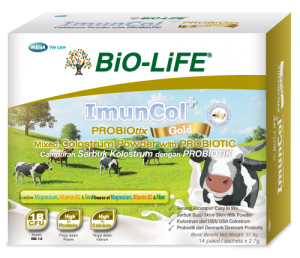 BiO-LiFE ImunCol+ Probiotix Gold is a dual action formula with both colostrum and probiotic Bifidobacterium lactis BB-12. Colostrum is the first milk produced by mammals (e.g., cows) during the first few days after giving birth4. It is highly nutritious with natural antibodies, thus providing immunological protection. According to a study, adults who took colostrum supplementation for 8 weeks had a shorter duration of flu as compared to those not taking it5. In addition, colostrum is clinically proven to be at least 3 times more effective in preventing flu as compared to vaccination5. At the same time, supplementation of probiotics such as Bifidobacterium lactis BB-12 is beneficial in maintaining a healthy balance gut microflora. About 70% of our immune cells are in the gut, which serves as the first-line defence system. Therefore, sufficient good bacteria in the gut will further promote optimal immune health.